Rush rushed to the Hospital 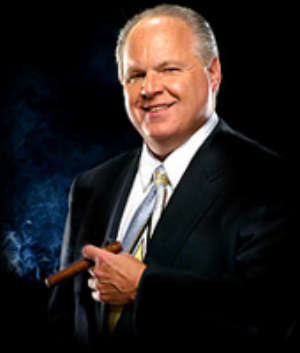 Rush Limbaugh was rushed to the hospital due to chest pains in Hawaii. Sources say he was in serious condition.

Paramedics responded to a call at 2:41 p.m. from the Kahala Hotel and Resort where Limbaugh is vacationing, KITV reported. The station, citing unnamed sources, said the 58-year-old Limbaugh was taken to The Queens Medical Center in Honolulu.

Kit Carson, Limbaugh's chief of staff, told The Associated Press from Milwaukee that he wasn't able to provide any information.

Queens spokeswoman N. Makana Shook said the hospital was unable to comment on the report.

Emergency Medical Services spokesman Bryan Cheplic said paramedics took a male of unknown age to an area hospital from the Kahala Hotel and Resort. He said he had no further information.

Email ThisBlogThis!Share to TwitterShare to FacebookShare to Pinterest
Labels: Hawaii, Rush Limbaugh, rushed to the hospital

Oh, and don't forget the painkillers...

Can't be his heart, he doesn't have one.