Eminem leaves the Homophobic Lyrics behind 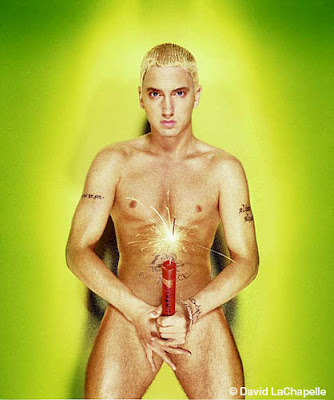 Eminem has been known to say some ugly stuff in his raps. Mostly his words about us (gays) has been the most eye popping.

But over the years, Em's has lighten up with the language. In fact, he's going to leave the homophobic lyrics at home.

Organisers of the Wireless Festival in Hyde Park have persuaded the rapper to drop his gratuitously anti-gay songs to avoid any demonstrations. Following Eminem's pledge, they have agreed a deal with gay rights groups not to picket the event next summer.

The last time Eminem toured the country in 2001, gay rights group OutRage! protested outside his shows, saying his lyrics were homophobic.

Event organisers were said to be worried that another such protest would cause major disruption to Wireless, which attracts tens of thousands of people.A festival insider said: “This is a huge signing for Wireless and it will be the hottest ticket this summer.

“The organisers were afraid campaigners could potentially ruin the event. So there was a lot of to-ing and fro-ing and Eminem only agreed to sign up when assurances had been made that there would not be any protests.

Good for him, now if he comes out, we all will be happy.

Meh, this seems more like Greenday agreeing to not curse on Am. Idol. One gig, and he's still got crap on his latest album.

Don't get me wrong, I still listen to him, but not as much as his wordplay observes.. can't hear it over the gritting of my teeth.

Chile, we all know that Fiddy cent hit that, over and OVER again...mmmmhmmmm.
And that picture of him looks positively EDIBLE! lol. It really does. Em, in spite of his homophobia, is total dick bait.

He's still a douche in my books!