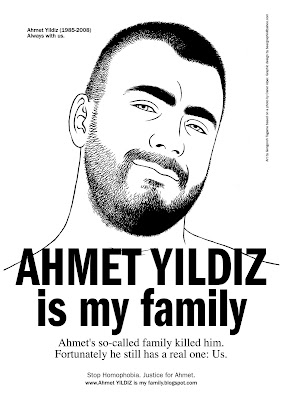 Howard and Bob posted this on their blogs, hoping to send the message. Please spread the word.

It was five month ago when Ahmet Yildiz told Turkish prosecutors that he had received death threats from members of his family. The prosecutor’s office declined to pursue the case and now Ahmet’s friends claim his family is responsible for his murder. He was gunned-down outside a café Wednesday, July 16th near the Bosphorus strait. After coming out to his family last year, Ahmet’s friends say he endured increasingly dangerous threats from them. He was a physics student and travelled to San Francisco to represent Turkey at an LGBT rights conference in 2007.
Some friends of Ahmet Yildiz are calling this homophobic murder an ‘honour killing’ in reference to their belief that his family is responsible and the fact that his family refused to remove his body from the morgue for an unusually long time.

The LGBT and Bear Community worldwide wants to pay homage to Ahmet Yildiz as a reminder of all the people that suffer discrimination in the world based on their sexual orientation, and to ask to all governments in the world to fight against hate crimes.

Thanks for posting. When I first saw this, I just cried. Now I hope as many people see it as possible. Because Ahmet is my family.

So sad - at least we can pray for a change in how people think when it comes to these issues!