Still bitter over their loss, Stand for Marriage DC has placed ads on metrobuses that reads “Let the People Vote on Marriage”. 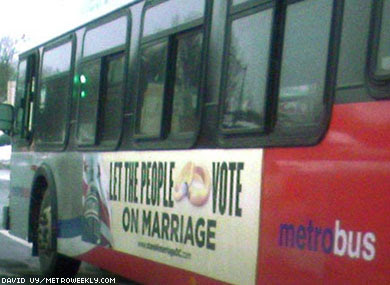 The ads are sponsored by Stand for Marriage DC, a group closely affiliated with the National Organization for Marriage, which was largely responsible for ending marriage equality in Maine by putting the issue on the ballot in that state. The D.C. council and the district’s election board have denied repeated attempts by SFMDC to put marriage up to a popular vote.

The gay group Full Equality Now DC has come out against the ad campaign, writing a letter to the city’s transportation authority demanding that the ads be taken down because they force gay people to “stare down discrimination as they board the bus to go somewhere or are even passed by an advertisement on the street.”

But not all pro-gay people are falling in line behind FENDC’s demands. Another group, led the Gay and Lesbian Activists Alliance’s president Mitch Woods and a number of other activists, has come out in favor of SFMDC’s freedom of speech. In its own letter to the transportation authority, this group writes, “Free speech is not only for those whose beliefs we find acceptable. The proper response to offensive speech is more speech. Your proper response to Full Equality Now DC, therefore, is that those who object to ads for Stand For Marriage DC are free to place their own ads.”

Stand for Marriage DC hopes to rally enough support overturn marriage equality, but even that attempt seems far fetched. We will see how this goes.