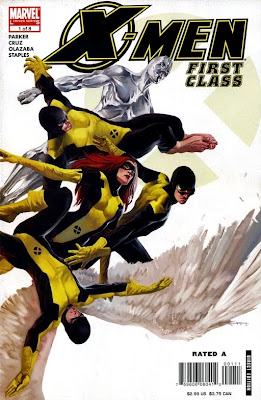 Well, this is some news for the comic fans. Bryan is back with the X-Men!

During the Los Angeles premiere of James Cameron’s ‘Avatar’, Bryan Singer let it slip that he has recently signed on to direct “X-men: First Class.”

While being interviewed on the red carpet by a film crew from Myspace, Singer said "I'm ramping up to do a movie called 'Jack the Giant Killer' at Warner Bros, and I just yesterday signed a deal to do an 'X-Men: First Class Origins' picture, which is kind of cool. I'm very excited."

I'm very happy to hear this since he did a great job with the first 2 movies. I'm sure he will give it his all and keep Josh Schwartz away from the flick.

I'm a little confused about this news because they introduced Angel as a young "new mutant" in X3 and Bobby as a current X-man. How are they gonna put Angel and Ice man a whole age group earlier since jean and Scott are part of the original first class? And Beast? in X3 he was old enough to be all of fathers next to Charles and Erik. This will be some fancy foot work indeed; unless they just do a reboot or re-imagination of the canon.

I wonder if it'll be a reboot or a prequel to the other X-movies. If it's a prequel you won't have the original line-up, which'll be too bad. No Ice-man or Angel. Guess they'll use Storm instead. But at least it wouldn't have Wolverine in it!

That is good news. I felt he got a bum rap, b/c I liked Superman Returns.

Mechadude...you may be all by yourself on that one...may be...