A Deleted Scene from A Christmas Story?

Yes, there is a scene and here is the proof. 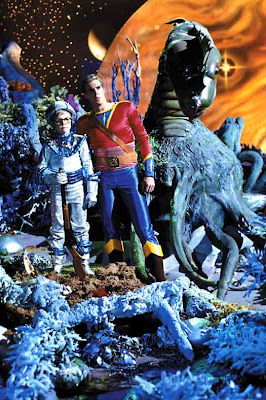 As with all movies there are several scenes in the script and filming that do not make it into the final cut of the movie. According to Stan Cole, editor of A Christmas Story there was pressure from the movie studio, MGM to keep the movie to around 90 minutes so that the movie could be shown every 2 hours in the theatre. Among the scenes cut were several possible opening scquences, a fantasy sequence in which Miss Sheilds visits Ralphie’s house and then Ralphie rescues Flash Gordon from Ming the Merciless on planet Mongo, and another fantasy sequence in which Ralphie rescues Santa from Black Bart and his men. Interestingly enough Flash Gordon and Ming the Merciless still made it into the credits for the movie. The costumes, skectches and pictures from this scene are part of the collection at A Christmas Story Museum. Unfortunatley none of the film footage of the scenes survived.

To read the script, go here

Unfortunatley none of the film footage of the [Flash Gordon] scenes survived.

That we know of. I'm sure someone has a copy of those scenes stashed away somewhere..

That said, I never understood how someone can make a film and simply discard the footage like that.

It's too bad this had to happen, especially with these scenes. They would have enhanced the film. Like so many things, money trumped good film making, in this case.