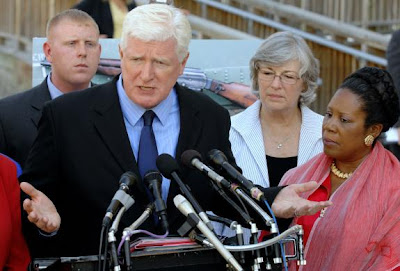 Folks are trying to get DADT on the move in 2010. Rep. Jim Moran (D-VA) has written a letter Defense Secretary Robert Gates about the matter.

We write today with regards to the current prohibition on openly gay and lesbian service members in the military, commonly known as “Don’t Ask, Don’t Tell” (DADT).

This discriminatory policy results in the Department of Defense losing tens of millions each year in unrecoverable recruiting and training costs. The 2006 Blue Ribbon Commission’s report on DADT found that the Pentagon wasted over $360 million due to this policy from 1994 until 2003, the last year studied. Since its enactment in 1994, over 13,500 service members have been discharged under DADT, including 730 mission critical soldiers and over 65 Arabic and Farsi linguists vital to the war on terrorism.

To increase transparency on the effects the DADT policy is having on our military and by extension our national defense, we request that the Office of the Secretary of Defense provide data on the current number of DADT discharges since January 1, 2009 to the present, no later than January 15, 2010. In addition, we request monthly reports thereafter to Congress detailing the number of enlisted service members and officers discharged under the policy including their job specialty (MOS), time in the service and branch of the military. Through these monthly updates, Congress and the public will get a clearer picture of the continued costs and damage to our national security inflicted by this policy.

We appreciate your attention to this matter and look forward to a timely response.

DADT could be added in the Defense Department budget authorization bill, just like the Hate Crimes bill. Hopefully, we can gain the same success.
Posted by Wonder Man at 12:53 PM

Lots of letters but no real action.
it's frustrating.