Asher Roth is gay... I think 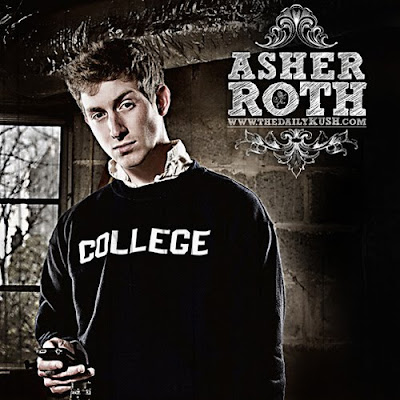 I've been hearing about this all day, but here's the latest:

Rapper Asher Roth will appear on E!News during the Christmas Holiday celebration to talk about his recent “coming out of the closet”. Asher was recently at a Gay Rights Parade with Lady Gaga, American Idol Winner, Clay Aiken, Blink 182, and REM lead man Michael Stipe. Asher Roth, who came out of the closet last week, is making his first appearance on E!News this week.

Asher, who was dropped from SRC Records, is currently the only major hip hop star that has admitted he is a “gay rapper”.

He admitted that he was one of the gay rappers mentioned in MTV’s Terrance Dean’s book. Terrance Dean posted the news on his blog, after he said he wasn’t going to name names. He was very happy that Asher came out of the closet before he had to mention names.

Asher, who has been on numerous rally’s and marches over the past year, really became visible in the gay community with American Idol winner, Clay Aiken.

Good for Asher, I hope his career blossoms. If you don't know him, here's his video.

However this quote from the article rubs me completely the wrong way: "Roth himself has not commented on the matter, and but the Pennsylvania native did tweet on Sunday that he was about to watch some football."

How the F&*! does him watching football have ANYTHING to do with the story at hand? Is the reporter suggesting he CAN'T be gay 'cause he watches football?
I can find no other interpretation.

Is it a step forward or backward that straight artists are now using gay rumors to gain media attention on themselves? Because that's what this is. Roth's second single was middling and people forgot about him. But hey, now he's getting press! Whatevs.

And if after I write this, he does actually come out, I still won't believe it until he starts dating me. And even if he did that, I'd prolly still be a little skeptical...