The Karen Golinski Case: the drama, the result, the blame 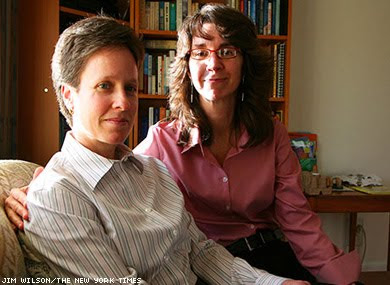 Some of you may have heard about the The Office of Personnel Management matter, involving a staff Karen Golinski trying to get benefits for her partner.

Well at first, she was denied by the OPM & Obama Admin. Then Judge Kozinski, from the 9th circuit, stepped in and ordered that OPM stop interfering and asked the Obama Admin comply with his order.

Okay, I tried make it quick, but go here for the detailed version of the story above.

Anywho, the final decision was the OPM does not have the legal authority to provide benefits to Karen Golinski's partner.

And, that Judge Kozinski's order was not legally binding.

It’s important to understand that Judge Kozinski was acting as an administrative official in this matter, reacting to the concerns of an employee of the judiciary. He was not acting as a federal judge in a court case. This does not mean that the inability to extend benefits to Karen Golinski’s spouse is any less real or less painful, but it is a critical point.

The decision in this matter was not reached lightly — after we learned of this development, we examined our options and consulted with the DOJ. DOJ advised us that the order issued by Judge Kozinski does not supersede our obligation to comply with existing law because it is not binding on OPM, as it was issued in his administrative capacity, and not as a judge in a court case. Thus, this type of order does not change the existing law, which DOJ concludes prevents the enrollment. DOJ also advised us that DOMA prohibits same-sex spouses of federal employees from enrolling in the FEHBP and that the law does not permit OPM to allow this enrollment to proceed.

Okay, somewhat clear. I got it. But you know a day can't pass without folks trying to blame Obama for it. AmericaBlog Gay said that Obama violated the Judge's order, but if it's not legally binding, how can you violated it?

Others are saying that they went out of their way to deny Karen's partner. Really? This is law, like it or not, it is law.

I'm not happy with the decision, but it's the reality. Once DOMA is overturned, this will be a moot point. But to jump to conclusions and make assumptions really hurts our credibility. Who will take us seriously, if we are blaming Big Bird for having feathers?

This has to stop, Obama Admin didn't go out of their way to crush Karen's daydreams. They just followed the law, I thought we wanted folks to follow the law, not make them up as they go along. That's what the Bush admin did and we didn't like it at all.

I'm sorry, but I've lost patience with the Obama administration in regards to most LGBT issues.

If this ridiculousness is the law, then they ought to be working hard to change the damn law. It seems as if the administration spends a lot of time making excuses for why they CAN'T do stuff for the LGBT community, and very little time actually doing anything.

Again, I say this with the utmost love, respect and admiration for you. I'm not suggesting you stop pointing out the good things, but you must understand how some people (like me) are starting to sour.

BTW, I happen to think you are much more fabulous (and cuter) than John Aravosis. And a much better lunch companion :)

With Love and Respect-

I understand, I just think we should not let folks get us worked up if there's no real reason. I try to stay poised on many of these matters... I try.

You ALWAYS stay poised ... that's why I love you.

I don't know, maybe the expectations were too high for the Obama administration. After 8 years of George Bush, I think a lot of us thought we were going to get this Knight in Shining Armor in the White House to champion our causes. And what we got, of course, was a politician (as all Presidents have to be in order to get elected in the first place).

So I think people like me are partially to blame for this situation. We thought we were getting Superman ... and we got, of course, just a MAN. And while our expectations may have been unrealistic, it's still a little disappointing. Reality usually is.

True, I knew it would be an uphill battle for LGBT rights when he was elected.

It's a huge culture change that will challenge so much.

I know it's nerve racking, but it will happen. We just have to have faith.