Jersey Shore may get Shut Down 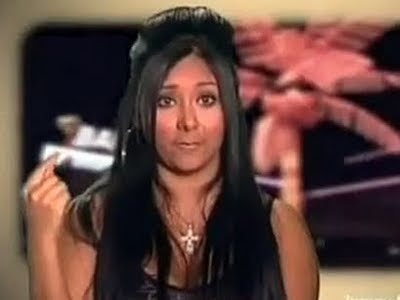 Labeled as a modern day minstrel show, Jersey Shore, is getting heat from the NJ lawmakers!

In a letter sent Tuesday to the president of Viacom, MTV's parent company, caucus chairman Joseph Vitale asks that the show be immediately taken off the air.

The state lawmakers also have asked advertisers to boycott the show, which focuses on eight tanned 20-somethings and their escapades in Seaside Heights, a popular New Jersey beach town.

On Wednesday, a Viacom spokesman referred a request for comment to an MTV spokesperson, who did not immediately respond. MTV has said its intention is not to stereotype or offend.

Wow, it's interesting how this show is getting hounded. I can't blame them, the show is horrible! I wonder if they will succeed with shutting it down.

UPDATE: Dell (computer peeps) has pulled their ads from the show.
Posted by Wonder Man at 7:32 AM

As someone who is Itlian-American (Actually I consider myself more American than Italian though to look at me you'd question that!) I don't really care about this at all.

Yes there is a strong guido culture even where I live. It's pretty much a northeast phenomenon.

So much outrage over this one little show and yet, BET, an entire network of minstrelsy , gets to remain on the air?

Haven't seen it, wouldn't miss it if it goes.

Weird. I mean how is this worst than the Real Housewives of New Jersey or Sopranos? It's just Real World Jersey Guido edition. Don't get me wrong, it's bad, just not any worse.

Merry X'mas, Vik and everybody else!

CAN SOMEONE PLEASE TELL ME WHAT IS A GUIDO????

Dovie, a Guido is a another version of the N-word for Italian-Americans.

The only thing these "boycotts" do is give the show more publicity - thus making it more popular. Let's face it, everybody is blogging, tweeting and talking about Jersey Shore - especially the people who hate it.

MTV is making a FORTUNE off of this show - it ain't going anywhere. In this case, there truly is no such thing as "BAD publicity" - it just makes people tune in to see what all the fuss is.

If you ask me, someone in the MTV Marketing department is a genius - and is feeding this "outrage" story to the media. Then bloggers pick up the story and keep it going - thus generating more interest in Jersey Shore and increased revenue for MTV.

And, meanwhile, Snooki, Pauly D, and The Situation are becoming household names. If it wouldn't have been for this whole "Guido" outrage story - no one would even be paying attention.

Think of it this way - every time someone blogs about Jersey Shore (even a "negative" story) you contribute to its popularity. I just hope people keep talking/blogging about it - because I think the show is highly entertaining.

iI can see both sides, but I'm a lttle surprised at the backlash. There are worst shows... even worst than this.