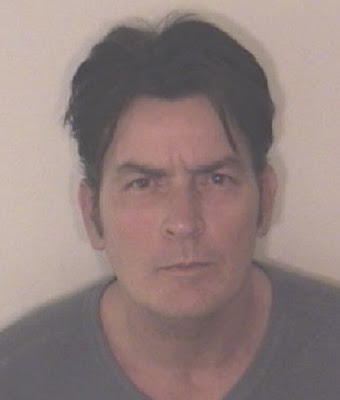 This man is always in the midst of mess.

Sheen, whose real name is Carlos Irwin Estevez, was arrested on suspicion of second-degree assault, menacing and criminal mischief and was being held with no bond, according to a news release from the Aspen Police Department. Police said they were called to 320 West Hallam Street in Aspen at 8:34 a.m. because of “a domestic violence situation,” according to the release. The alleged victim was not identified.

An ambulance arrived at the scene, but the alleged victim did not need to be transported to the hospital, authorities said. Sheen, 44, of Encino, is being held at the Pitkin County Jail.

Sheen was also arrested in an alleged domestic violence incident in 1996 when a 24-year-old woman told authorities that he pushed her to the floor during an argument at his Agoura home.

Charlie get some help or something. Once of these days, one of these girls is going to throw a pot of hot grits on you!

This is sad!
I love Charlie Sheen... I thought he was doing well for himself, apparently not!
He'll learn one day