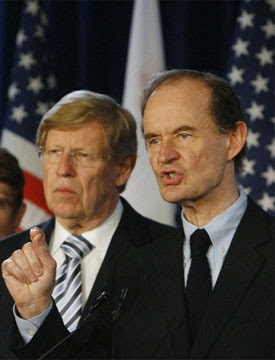 The Federal Prop 8 trial starts on January the 11th and it may go on for a month, so don't start screaming and threatening a boycott. (jk)

The trial in the federal lawsuit seeking to overturn California’s Proposition 8 starts Jan. 11 in U.S. District Court in San Francisco.

It could last a month.

Representing the gay side are famed attorneys Ted Olson and David Boies, who, in 2000, argued opposite sides of the Bush/Gore "hanging chad" election mess before the U.S. Supreme Court.


Intervening for the gay side are lawyers from Lambda Legal, the American Civil Liberties Union, and the National Center for Lesbian Rights. Their request to join the case on the same level as Olson and Boies was denied after they angered Olson and Boies by speaking ill of the case, saying it was poorly timed and unwise. The city of San Francisco also has intervened on behalf of the gays.

So this may be entertaining.

Just the pre-trial stuff has been interesting. The opposition can't come up with a valid reason to oppose marriage equality.

The courts don't give a rats ass abot the religious arguments. Those have been argued ad infinitum for centuries. They're more concerned with the core argument, is Prop 8 constitutional.