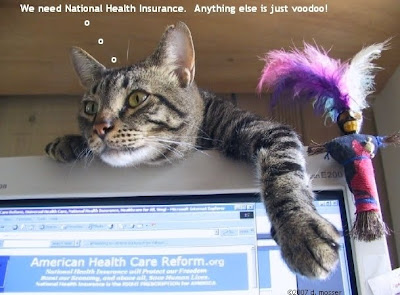 Landmark health care legislation backed by President Barack Obama passed its sternest Senate test in the pre-dawn hours early Monday, overcoming Republican delaying tactics on a 60-40 vote that all but assures its passage by Christmas.

The bill would extend coverage to more than 30 million Americans who now lack it, while banning insurance company practices such as denial of benefits on the basis of pre-existing medical conditions.

Alright, let's get this done.

This is not reform at all, regardless of what the bloviating politicians will tell you.

I ran the numbers, it would have me paying $1,000 or more per month for myself and Keyron. The fine on the other hand would only run about $100 per month.

We should all drop the insurance and just pay the fine.