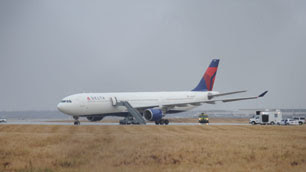 A fool claiming to be an agent of al-Qaida tried to blow up yesterday.

Flight 253 with 278 passengers aboard was about 20 minutes from the airport when passengers heard popping noises, witnesses said. At least one person climbed over others and jumped on the man. Shortly afterward, the suspect was taken to the front of the plane with his pants cut off and his legs burned, a passenger said.

One U.S. intelligence official said the explosive device was a mix of powder and liquid. It failed when the passenger tried to detonate it. "It sounded like a firecracker in a pillowcase," said Peter Smith, a traveler from the Netherlands. "First there was a pop, and then (there) was smoke."

Smith said a passenger sitting opposite the man climbed over people, went across the aisle and tried to restrain the man. Syed Jafri, another passenger, said he saw a glow and smelled smoke. Then, he said, "a young man behind me jumped on him."

"Next thing you know, there was a lot of panic," said Jafri. Smith said the heroic passenger appeared to have been burned.

What was this freak thinking? This fool is still be questioned, but I find it interesting that he told everything right off the bat. I wondering if he's really with al Qaeda. I guess we will see.
Posted by Wonder Man at 1:45 AM

Could you fools please try blowing something else up? Like a desert or something. Airport security is ridiculous enough as it is...and it just goes to show it doesn't really work anyway!

Not again for real!