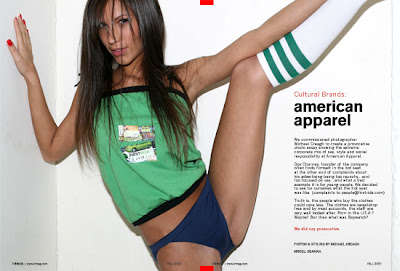 Maybe I've been on Mount Helicon too long, but when did American Apparel become upscale? I just saw this piece on Gawker and Joe.My.God; and I have to say I was floored.

If you want to work there, you need to send a full body photo to the AA CEO Dov Charney. He decides if anyone is worthy to work in the stores. But have you seen an America Apparel store? It looks like a beach townhouse inhabited by hoarders.

But anyway, there is the check lists for new folks. 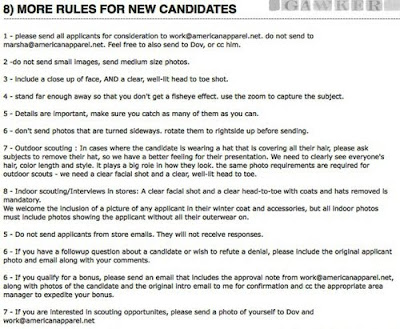 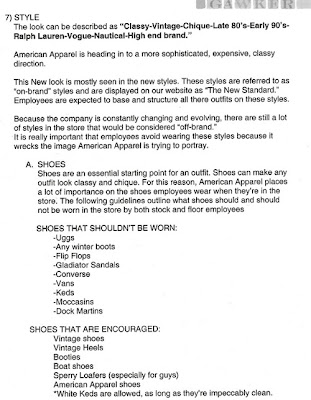 Silly mess! I mean, they act like they are Louis Vuitton are something. And no offense, but I make hell of a lot more than the AA manager, and I get to dress very snappy causal.

But there's more to this foolishness. The employees talk about what types of folks to hire. Here's one that got me... It's about Black girls:

"none of the trashy kind that come in, we don't want that. we're not trying to sell our clothes to them. try to find some of these classy black girls, with nice hair, you know?"

i will remember that forever, especially the "nice hair" part. he was instructing another manager and i on who to look for during an upcoming open call, and i sat there dumbfounded, listening to him speak while the other manager made "uh huh, got it" sounds on her end of the phone. the other manager on the call with me later became a district manager, and at one point instructed me to tell two of my employees (both of whom happened to be black females) to stop straightening their hair. i refused to do this, but wondered if the mentality behind her request was related to what dov had said.

American Apparel, please get over yourselves.

Email ThisBlogThis!Share to TwitterShare to FacebookShare to Pinterest
Labels: fashion

Isn't it illegal to ask for a picture as part of a job application? I thought that pictures could serve as a form of discrimination against the person applying for the job.