Folks are not feeling the Atheists up in Charlotte, N.C.

An Atheist group paid for this billboard to be displayed on Billy Graham Parkway last week, then out of nowhere, it was defaced: 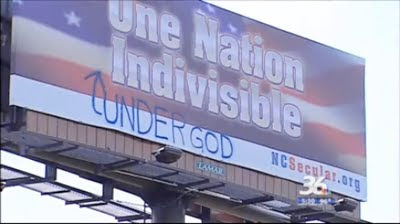 “It was done by one or two people off on their own who decided their only recourse was vandalism rather than having a conversation,” Charlotte Atheists & Agnostics spokesman William Warren said. “It does show how needed our message is. As atheists, we want to let people know we exist and that there’s a community here.” Warren told the Observer when the sign first went up that its location wasn't intended as a rebuke to the Rev. Graham.

He said the group has added more than 50 members since the ad went up. Atheist ads are often a target for vandals. Three of 10 atheist billboards erected in Sacramento, Calif., were defaced in February, and a series of atheist bus ads was recently vandalized in Detroit.

Mind Of Mine said...

V, I have an easier time telling people I'm gay or that I practice Wicca. We are here, we're atheists, they need to get over it!