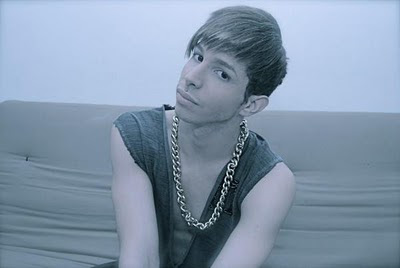 If you don't know or remember, Jorge was brutally murdered last year.

Edge on the Net reports:

Speaking through Pedro Julio Serrano of the National Gay and Lesbian Task Force, Myriam Mercado spoke about her faith and how it has provided her and her family strength since Juan José Martínez Matos stabbed López to death and dumped his decapitated, dismembered and partially burned body along a remote roadside near Cayey last November.

"The God I know is a God of love; he doesn’t make any exceptions," said Mercado, who joined her husband Jorge López, Sr., their son Gabriel López Mercado and Serrano at the podium. "He tells me we have to love our neighbor like we love ourselves."

Mercado told EDGE "with a crime so atrocious, it is important people unite in their pain." A judge sentenced Martínez to 99 years in prison last month after he admitted he murdered López. But Mercado said she remains grateful for the support she and her family continue to receive from around the world.

"We are very pleased by the support from people we don’t know," said Mercado.

I am proud to be standing with a Puerto Rican family that has sent a message of hope and love-especially love," he said as he held a gay Puerto Rican Pride flag. "Puerto Rico is a place of love, of acceptance, of welcoming people with open arms. We are not a country of hate."

That's good that he was honored.

I remember the story from your blog - thanks for bringing it to the forefront!

That's a nice thing for his family...