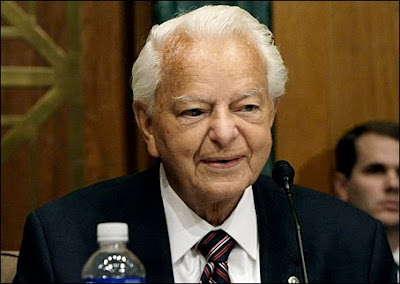 One of the oldest members of congress has passed away. Robert C. Byrd died early this morning.

And while I disagree with some of his actions, his story is very interesting. Here's just some of the many tales of his life:

Byrd's accomplishments followed a childhood of poverty in West Virginia, and his success on the national stage came despite a complicated history on racial matters. As a young man, we was a member of the Ku Klux Klan for a brief period, and he joined Southern Democrats in an unsuccessful filibuster against the landmark 1964 Civil Rights Act.

He later apologized for both actions, saying intolerance has no place in America. While supporting later civil rights bills, he opposed busing to integrate schools.

Byrd briefly sought the Democratic presidential nomination in 1976 and later told associates he had once been approached by President Richard M. Nixon, a Republican, about accepting an appointment to the Supreme Court.

But he was a creature – and defender – of Congress across a career that began in 1952 with his election to the House. He served three terms there before winning his Senate seat in 1958, when Dwight D. Eisenhower was in the White House.

He clashed with presidents in both parties and was implacably against proposed balanced budget amendments to the Constitution.

"He is a fierce defender of the Senate and its prerogatives in ways that I think the founding fathers really intended the Senate to be," said one-time rival Kennedy.

In a measure of his tenacity, Byrd took a decade of night courses to earn a law degree in 1963, and completed his long-delayed bachelor's degree at West Virginia's Marshall University in 1994 with correspondence classes.

Byrd was a near-deity in economically struggling West Virginia, to which he delivered countless federally financed projects. Entire government bureaus opened there, including the FBI's repository for computerized fingerprint records. Even the Coast Guard had a facility in the landlocked state. Critics portrayed him as the personification of Congress' thirst for wasteful "pork" spending projects.

Before he was 1, his mother died and his father sent him to live with an aunt and uncle, Vlurma and Titus Byrd, who renamed him and moved to the coal-mining town of Stotesbury, W.Va. He didn't learn his original name until he was 16 and his real birthday until he was 54.

Byrd's foster father was a miner who frequently changed jobs, and Byrd recalled that the family's house was "without electricity, ... no running water, no telephone, a little wooden outhouse."

He graduated from high school but could not afford college. Married in 1936 to high school sweetheart Erma Ora James – with whom he had two daughters – he pumped gas, cut meat and during World War II was a shipyard welder.

Returning to meat cutting in West Virginia, he became popular for his fundamentalist Bible lectures. A grand dragon of the Ku Klux Klan suggested he run for office.

He won his first race – for the state's House of Delegates – in 1946, distinguishing himself from 12 rivals by singing and fiddling mountain tunes. His fiddle became a fixture; he later played it on the television show "Hee Haw" and recorded an album. He abandoned it only after a grandson's traumatic death in 1982 and when his shaky hands left him unable to play.

At his 90th birthday party in 2007, however, Byrd joined bluegrass band Lonesome Highway in singing a few tunes and topped off the night with a rendition of "Old Joe Clark."

After six years in the West Virginia legislature, Byrd was elected to the U.S. House in 1952 in a race in which his brief Klan membership became an issue. He said he joined because of its anti-communism.

Byrd entered Congress as one of its most conservative Democrats. He was an early supporter of the Vietnam War, and his 14-hour, 13-minute filibuster against the 1964 civil rights bill remains one of the longest ever. His views gradually moderated, particularly on economic issues, but he always sided with his state's coal interests in confrontations with environmentalists.

He is one of the reasons i am so for term limts.
Without them, politics becomes a career, and no longer public service. Plus, with term limts, you force the constiutuency to pay attention to elections and candidates; it isn't just Vote For The Incumbent.
I'm sorry the man died, but I wish we'd work for a two-term limnt on all public offices.