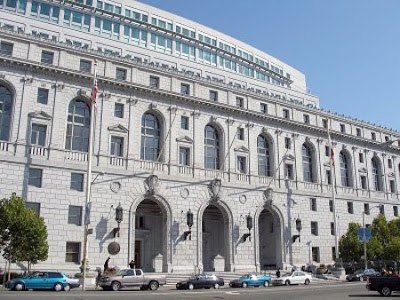 The end game is going down today in San Fran. Folks are gathering around the courthouse, ready to support either side.

However, our opponents have stooped to a new low. They have submitted a request to revoke the other 18,000 gay marriages recognized in the state.

Such an order would honor "the expressed will of the people," backers of the November 2008 ballot measure said Tuesday in their final written filing before Chief U.S. District Judge Vaughn Walker.

Andrew Pugno, an attorney for Prop. 8's backers, said in an interview that the sponsors aren't asking Walker to nullify the 18,000 marriages, but only to rule that government agencies, courts and businesses no longer have to recognize the couples as married.

Lawyers for two same-sex couples who sued to overturn Prop. 8, on the other hand, are asking Walker to lift the marriage ban permanently. The measure violates the constitutional guarantee of equality, they argued, and must be struck down "regardless of its level of public support."

Walker heard 12 days of testimony in his San Francisco courtroom in January in the nation's first federal court trial on the constitutionality of a law defining marriage as a male-female union. Among those who took the stand were the plaintiff couples - two women from Berkeley and two men from Burbank - and a parade of academic witnesses who testified about the history and meaning of marriage and the status of gays and lesbians in society.

The judge has scheduled closing arguments to last all day today. His ruling, which could be weeks away, will be the first round in a battle likely to reach the U.S. Supreme Court within two years.

I'll keep y'all posted throughout the day.

Source
Posted by Wonder Man at 7:50 AM