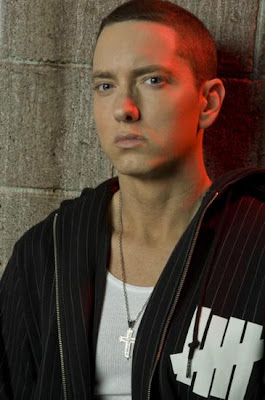 In an interview in the New York Times, Em talks about the 'new tolerant' Eminem and how he thinks we should get married.

You’ve been accused of writing gay-bashing lyrics in the past. Would you like to see gay marriage approved in Michigan, where you live?
I think if two people love each other, then what the hell? I think that everyone should have the chance to be equally miserable, if they want.

Is this the new, 37-year-old tolerant you?
It’s the new tolerant me!

I guess hanging with Elton John has helped, right? There's more in this interview. Check it out if you like.
Posted by Wonder Man at 8:24 AM

Can we say, "I need to boost my album sales?"

Can we say, "I need to boost my album sales so that I can continue to afford my Botox regimine?" Is it just the makeup they are using or does he look as plastic as Tupperware to anybody else?

Also, if you support gay marriage stop saying it's because we deserve to be miserable too. It may seem supportive of us, but is hardly supportive of marriage in and of itself. (I don't like it, so who cares if you want it.) That quote has seen it's day and it was a few years ago. I would think a rapper and writer as prolific as Em is supposed to be could come up with something less canned than that.

@ToddyEnglish, my thoughts exactly.
He's one of the many used-to-be-a-big-deals trying to claw their way back into fame because it seems like just yesterday they were living on top of the world.

Of course there's the possibility he actually does feel this way, but I still feel skeptical.

Is it possible to say anything else? The Prop-8 question is such a no-brainer...Why do we care?

Who'd have the balls to say that they're voting YES?

I think it's great if he is in support. Every bit helps.

Well how ELSE is he going to get married?