Peek A Boo, I See your Anti-Gay ass now, boo! 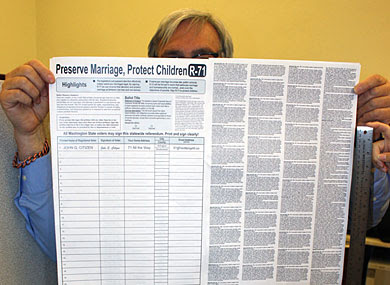 Today the Supreme Court ruled that the names of the folks who signed Referendum 71 in Washington will be made public.

The conservative group that tried to block release of the signatures wanted the nation's high court to uphold a lower court ruling that said signing petitions and referendum is constitutionally protected political speech - which by law is OK to engage in anonymously.

The group, Protect Marriage Washington, asked justices to shield the names of the 138,000 people who signed Referendum 71 petitions in hopes of overturning the "everything but marriage" same-sex domestic partner law. In November Washington voters upheld the new statute. Gay rights groups have said they'll post the petition signers' names online, and some fear harassment or threats if their names are revealed.

State officials had said there are laws in place to protect people who might be threatened.

See, you can't hate and hide.

Is this the U.S. Supreme Court? If so, this is great news. Now we can go after NOM!

Someone once said that sunlight was the best disinfectant!