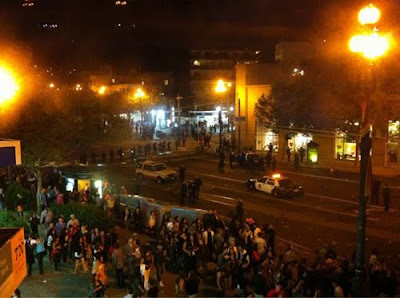 3 people were shot outside of a club in San Francisco’s Castro District last night. Several folks were wounded and taken to the hospital.

This is Gay Pride in San Fran, so many peeps are shocked over this incident.

The shooting took place along the 2300 block of Market Street in front of "The Cafe," a popular gay nightclub.

A teenage male sustained life-threatening injuries and two other individuals were wounded. A 19-year-old man was taken into custody in connection with the shooting and a weapon was recovered, KGO-AM reported.

Though a motive was not immediately known, eyewitnesses near the scene suggested the gunfight erupted due to a personal conflict and was not related to the area's event.

One man is seriously injured, I hope he gets better.

One of three victims of a shooting in San Francisco's Castro District late Saturday night has died from his injuries, according to the medical examiner's office.

Stephen Powell, 19, was shot in the torso about 11:30 p.m. at Market and Castro streets during the city's "Pink Saturday" celebrations, police said. The medical examiner's office could not confirm his city of residence.

Powell, along with a 19-year-old woman and a 29-year-old man who were shot in the leg, were taken to a hospital. Powell was subsequently pronounced dead.

The woman and older man are expected to survive, according to police.

A 19-year-old man was taken into custody in connection with the shooting, and police said they recovered the handgun used in the crime.

An attendant at the Chevron gas station, which is adjacent to the nightclub, said he heard four gunshots fired, although thick crowds made it difficult for him to see the scuffle.