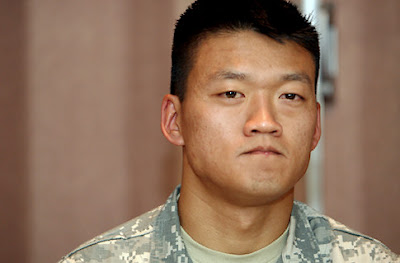 The WTF moment of the week will go to Dan Choi and James Pietrangelo. They are demanding Obama to testify in their trial on minor civil disobedience charges.

The subpoena seeks to compel the testimony of President Barack Obama who has, on several occasions as President and Commander in Chief (and previously as a Senator and Presidential Candidate) called on the LGBT community to "pressure" him to change the DADT law and policy, thus allowing gay service members to serve their country openly and honorably.

The subpoena of the President is necessary for the defense to prove that Defendants were following and obeying lawful orders or directives by their President and Commander in Chief, and were therefore under an obligation and authority to act as they did in order to pressure him - in a non-violent, visible way - on this important public issue. In addition, these statements support the contention that Defendants were acting out of necessity, in order to prevent discrimination and greater harm to gay service members now serving.

They claim they are following orders from Obama? I think they are being ridic. I'm sorry, but they are daft to think Obama is going to stand trial. And does this taint their activism?

Who are their lawyers? And will the military talk some sense into them? This has to be the worst move ever. Somebody please, get them off this burning train.

source
Posted by Wonder Man at 9:17 AM

Yes it taints their activism. It appears they are being advised by someone with a Jr. High mentality.

I was jokingly going to say that they needed to get laid, but then I thought about it some more. Could it be that simple? It could be that's exactly what they need. They need to take a day off and go somewhere and get porked good and hard. Maybe then they'll have a clearer idea for a legal strategy.

For me, it taints their activism on more than one level. First, taking orders from the President means they were not acting altruistically for the cause, just cause that's what they were told. And second, they seem to want to make a sideshow out of a trial, not truly talk about what is right and wrong. Color me unimpressed.

In my opinion it was a tasteless move. Why would you do something so outrageous when you want people to take you seriously? All they have done like Howard said is make this into a sideshow of a bunch of freaks trying to do the craziest things to get attention. It's not helping.

Then again I don't think a bunch of naked guys on a parade float is helping much either, but that's just me.

Apparently fame and publicity has gone to Choi's head. I knew after seeing him on so many shows like AC360 & Rachael Maddow that he would eventually try to make a stunt out his fame than continue on an altruistic cause...