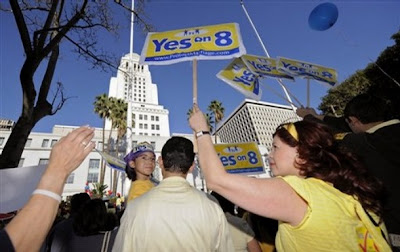 I believe that if you donate to a cause, you stand behind it, support it to the uttermost degree, right? And when you are called out about your stance, you stand for it without hesitation, right? Not if you are Yes on Prop 8 donor.

These donors are upset their info was put on blast and hate the heat they're getting from us. But really, how are they complaining? They believed they were right, they believed they had to donate to stop us. Once the list was made public, these crybabies want to be victims when the backlash started. And now there's a call to keep donors on the DL.

We have secret balloting for obvious reasons. Politics frequently generates hot tempers. People can put up yard signs or wear political buttons if they want. But not everyone feels comfortable making his or her positions public -- many worry that their choice might offend or anger someone else. They fear losing their jobs or facing boycotts of their businesses.

And yet the mandatory public disclosure of financial donations to political campaigns in almost every state and at the federal level renders people's fears and vulnerability all too real. Proposition 8 -- California's recently passed constitutional amendment to outlaw gay marriage by ensuring that marriage in that state remains between a man and a woman -- is a dramatic case in point. Its passage has generated retaliation against those who supported it, once their financial support was made public and put online.

They should have realized the consequences of their actions.

*CRAZY EXAMPLE MOMENT* If I donated money to remake X-Men 3 against Fox studios and later on, I'm in an interview at their studio, I should be aware that my donation issue may come up. And if it does, I would stand firm with my decision.

Okay, maybe not the best example, but my point is, they are not the victim, we are. While they lost business or jobs, we lost a basic right. So suck it up Yes folks, it's going to be a bumpy ride for awhile.
Posted by Wonder Man at 5:00 PM

Good to see that they're feeling the heat on this one.

I remember when the anti-gay marriage petitions went around in FL, MA, and a guy created the Know Thy Neighbor.

I found my father had signed the one in FL and called him on it. He wallowed for a bit when I asked how the hell he could sign the thing when he knew his son was in a sixteen year relationship with another man.

It finally came out, his preacher had them sign it.

Later I found out more about his preacher, a pigheaded racist son of a bitch. So I let dear old dad know about that too.