Burris is being PIMPED!

Former Illinois Attorney General Roland Burris has been in the game for years and I would believe he knows the in and outs of the political scene. So with all this knowledge and experience, why would he allow himself to a pawn in Rod Baloney Sandwich's foolishness.

When Rod got up on that stage and named Burris for the Senate, I knew there was something wrong with it. He's under all this drama and folks are trying to impeach him...why would he appoint someone in the middle of this mess?

And Burris...why would he accept the offer while Rod's under all this investigation? He should have waited until all of this is over. 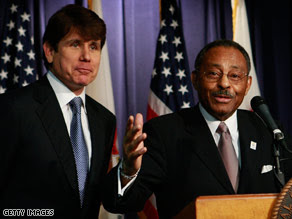 Burris says the Rod Drama has nothing to do with him, but it does. It looks shady and it acts as a way to buy Baloney Sandwich time. Burris should be smarter than this. I feel he's letting his dreams get in the way of reality. I know he's qualified, that's not the issue and his race isn't an issue either (you hear that Illinois Rep. Bobby Rush). Integrity is the issue. If Burris has any sense, he will step aside until the mess is done.

Pleading on TV and acting like nothing is going on with your appointment is foolish and shady, Burris. You need to trust in the system and step aside. A man of your stature should not be made a fool of.
Posted by Wonder Man at 1:18 PM