If you see any Vampire movie it should be this one... 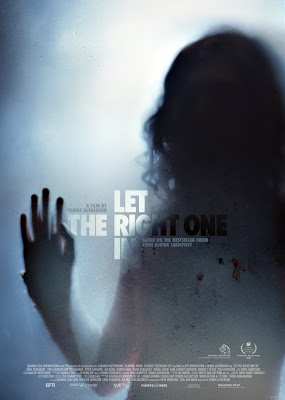 Let The Right One In is the bomb! I can't believe this was in limited release. Funny, it has the same premise as Twilight, (two young folks against the world, one just happens to be a vampire) but there's so much more in the movie!

A young kid, Oskar is not a popular boy. He misses his dad, kids pick on him, and he's kinda falling into Dahmer state of mind, until he meets a weird and mysterious girl named Eli, who's his new neighbor and only comes out at night.

The film is dark, haunting and intriguing. The flow of the story is a steady pace and there's so much happening in the scenes. As normal, I will keep this vague, but I highly recommend this movie. It's creepy, horrific, and great. I am very pleased with this film and pray they will never remake it. Love this movie.
Posted by Wonder Man at 1:03 AM

Email ThisBlogThis!Share to TwitterShare to FacebookShare to Pinterest
Labels: greatness, horror, Let The Right One In, movie, vampires

It's not playing anywhere near me, I guess I'll have to wait until it comes out on DVD

I really want to see it. Fangoria magazine says the remake will be out 2010.

We saw it yesterday and loved it. But, i've heard a rumor that a studio is set to release a remake in 2010. I pray that it isn't so!!!

Thanks for the recommendation... I'll be sure to see it before the remake ruins it.

Thank you for this, it blew my mind.

There's this stupid idea in
Hollywood that kids look and act something like High School Musical, chaste and high-fiving. That isn't so. Early adolescence can be dirty, gritty and disturbing, just like this movie!

Stephenie Myer should be a little worried, even bits like "I've been 17 for a long time" are lifted straight out of this film, and I'm assuming, the book it's based on (except it's "Ive been 12 for a long time" here). Hmm.

I can see the remake now...Megan Fox, someone out of The O.C....*shudders*

I especially liked the pedophile twist. It made me go "damn, i wish I'd thought of that!"