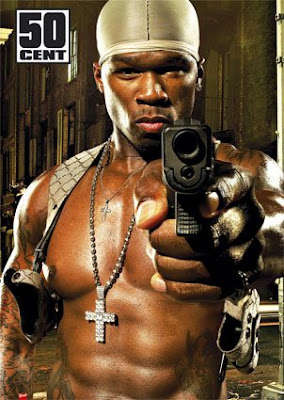 The bane of the Black man's existence, known as 50cent, is feeling the heat of the Obama age.

MTV did an odd thing; they dropped a stupid show, but not any stupid show, 50 cent's stupid show. His “The Money and the Power” pimp mess was dropped. Apparently somebody told them 50cent has no power anymore and Black men want to be more than fake Gs.

“Our new shows will feature themes of affirmation and accomplishment,” says Brian Graden, president of entertainment at MTV Networks music channels and president of Logo. “Our shows are going to focus less on loud and silly hooks and more on young people proving themselves. These are themes that are consistent with the Obama generation.”


Really?That remains to be seen, but I applaud them for setting standard. It's time for the Theo Huxtables to rise up. Thank you, MTV.

Email ThisBlogThis!Share to TwitterShare to FacebookShare to Pinterest
Labels: “The Money and the Power”, 50 cent, Black men, mess, role model

What about Sean Combs' new perfume ad called I am King?

King of what, exactly? I thought I was gonna puke.