HasselBRAT Whines her way into the White House 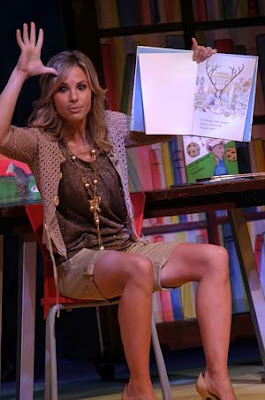 She's a tart! Elizabeth Hasselbrat whined and whined about not receiving her stanking annual invitation to the White House Christmas Party.

Instead of calling someone, the heifer put them on blast on The View, saying:
"Maybe I didn't do enough for the Republican party this year?"

Actually, you didn't. You helped Obama with your uninformed, lack of point, blonde-like foolishness.

However, the White House called her and told her it was an oversight.
"Following today's live show, Elisabeth received a call from the The White House, and they both had a great conversation," Karl T. Nilsson, the executive publicity director of The View told Usmagazine.com. "The President's office apologized and explained that she and her husband were indeed invited to the White House for Christmas and were sorry that it did not arrive. It was simply an oversight."

I hope she enjoy her LAST time at the White House. I'm sure Michelle ain't going to have that hag at any of their events.
Posted by Wonder Man at 5:46 PM

Man, do I fucking hate that stupid-ass skank ho.

So let's see, bitch lost on Survivor, married a quarterback, was impregnated by said quarterback, and somehow we're now supposed to give a flying fuck what she thinks about anything?

Oh hell no. That is a tacky way to get an invite. And it even lamer that they ran the got lost in the mail line. I bet she'll be seated near the doors where the waitstaff come in and out of.

Yeah, I DELETED this one too... LOL