The Harsh Reality about the ATL Housewives 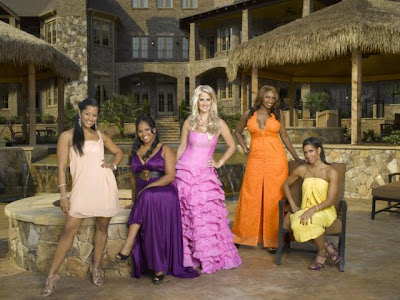 This is sad, because this was the best Houswives show of them all. The others are boring, the ATL girls were bringing it, but now the backstories are out and nothing will be the same again.

Now if you follow my blog, you know I've already talked about NeNe and her drama. Now there's more about the others girls.

Sheree was basically living for child support and guilty money from her divorce. But her past brought Sheree up from Evil-lyn to a character in one of VC Andrews's novels. Sheree always talked about her 2 kids but in reality she has 3. Tierra is her first daughter, she's 23. In reports and interviews, Tierra is mentioned as a close friend. How cute, Sheree. Also she didn't get that 7 figure divorce money so now, she selling everything.

Lisa was married to R&B nasal singer, Keith Sweat and he has custody of their two children. Wait 2 kids? She didn't even talk about them.

Then there's Kim. She's also selling her home and possibly dating cosmetic surgeon, Dr. Stefan Lemperle who were under some legal troubles from poisoning patiences with FDA NOT approved wrinkle filler.

I can't believe it, but I guess that's reality. However, it's interesting how this group has so much back drama and folks went out of their way to get this info. Have anyone search through the OC housewives' stuff? Those women are uber-fried in silcone and drama, and yet I don't see so much info spread out on them...hmm.
Posted by Wonder Man at 3:13 PM

I think part of the reason they got so much attention was partly do to the fact that the season was so much different than the others; specifically because it was targeting a different demographic: the black middle-class. Though Kim was there she was an honorary black woman.

Also the way the show was edited really made it seem as if it was all drama. I'm sure had Bravo edited the other Housewive's seasons it would have been received a bit differently.

The last point is of course that these women themselves, despite their 'apparent' money, did not fit the mold. They were all in one way a facade of middle-class, whereas the other women. Towards the end the season reasons to watch became more focused on seeing how they would make a mockery of their lifestyle. "Ne-Ne" in particular.

There is PLENTY of dirt on the Real Housewives of Orange County!!
Read
absurdtosublime.blogspot.com