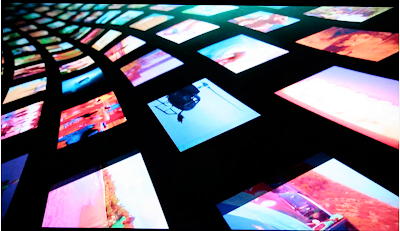 Crazy talk time! So looking back at the Bush years and television, I noticed how bad it was. We escaped and indulged too much in the celebs, rich folks, and reality shows. However, with Obama in the House, we may see a shift in the tube.

For one, there will be an increase of multiracial folks on TV. We got a taste of that with Tracee Ellis Ross and Persha White from Girlfriends, Rashida Jones from The Office, Kimora Lee Simmons, and Sidney Pointer in Knight Rider. I have a feeling there will be more actors and actresses of multicultural backgrounds all over the fall season.

Less rich folks TV. Bush's tax cuts made the rich richer and the rich on TV the annoying infomerical that wouldn't go away. Now with the recession, folks don't want to see silly rich kids crying over a $12,000 dress because it's not $12,500. People will want to see real people trying to make it and possibly succeeding the hard way...working for it.

The return of middle class TV. Bush almost wiped out the middle class during his run as president. And with that, we lost sitcoms and dramas based on middle class families in the US. But I think that we will see a return of the Good Times/Roseanne type shows. Again, people want to identify with TV characters with similar issues. With our current state, folks need a family or a person to be less celeb and more human.

Less trash more reality. I think we could see reality shows based on real issues. Tila Tequlia won't be a mega star, but the Biggest Loser will. I think people want to see someone like them. Living in a fantasy isn't cute anymore.

I know this is crazy talk and wishful thinking, but I think an Obama presidency could shift our thinking. This could be a good time for the quality of television...hopefully.
Posted by Wonder Man at 9:53 AM

This is a fascinating prediction... Let's watch and see... I remember Dynasty/Dallas was sort of the quintessential programming during Reagan...

Actually, I think television made huge leaps forward during the Bush administration. I never used to watch TV before, apart from cartoons and maybe Buffy and Stra Trek once in a while. Now I religiously watch Lost, Grey's Anatomy, Desperate Housewives, Ugly Betty, Pushing Daisies, Battlestar Galactica...and I lose count of the stuff I can't watch because I dont have time.

I think television has become a polar place. On one hand we have these intelligent, well-written, serialised and highly produced television shows, and then on the other hand we have all the reality trash.