The OTHER Rev. in the Room 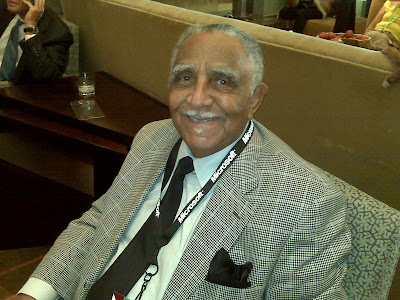 Instead of talking about Ricky, let's talk about the other Rev. in the room, Rev. Joseph Lowery. This man has done so much in his lifetime and he's truly an example social justice and good faith.

Rev. Lowery start his journey right after Rosa Parks made her historic stance. He help lead boycotts and protest in Montgomery and with Dr. King founded founded the Southern Christian Leadership Conference which he was president for 20 years.

Lowery also co-founder and leader the Black Leadership Forum. This group were active against the Apartheid and he was among the few to get arrested at the South African Embassy in during the Free South Africa movement.

Later he became a pastor in Atlanta and remains very active in the civil rights movement. In fact, he is huge supporter of LGBT rights and our right to marry. He has received many awards for his work and he is dedicated in the fight for social justice.

This choice was a wise choice for Obama. I hate that through all of this hype, we barely hear about the Rev. let alone the accomplishments Lowery has achieved. I only hope to do as a fourth of what he's done in my lifetime. So please everyone, look at Joseph Lowery as the balance to Rick Warren. Let his message, his work, and his purpose speak loudly that night and hopefully beyond.
Posted by Wonder Man at 1:48 PM

The underdogs are often always left out. People should remember that Obama and his greatness is important, but ultimately it is the small people: the teachers, the preachers, the social workers, whose dedication and unending work is bringing forth a real change. As Margaret Mead wrote, "Never doubt that a small group of thoughtful, commited citizens can change the world. Indeed, it is the only thing that ever has.