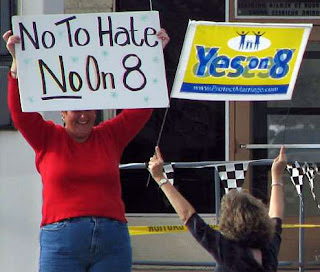 Protect Marriage and NOM are about to get blasted! They can no longer block folks from seeing their finance records.


A federal judge in Sacramento ruled against ProtectMarriage.com and the National Organization for Marriage in a nearly 3-year-old lawsuit, saying the groups failed to prove they should be exempt from state campaign disclosure laws.

"The winners here are really the voters of California," Lee said. "The 1st Amendment interest that the judge upheld in his ruling is the interest in having a robust democracy, an informed electorate and vigorous debate."

ProtectMarriage.com is a coalition of religious and conservative groups that sponsored and campaigned for the state constitutional amendment known as Proposition 8, which was approved by 52% of California voters and has been subject to continuing court challenges by same-sex marriage supporters. The National Organization for Marriage solicited donations that were used to qualify the measure for the November 2008 ballot.

This is great news. I would love to see the money trail, especially the ones that lead to businesses we may unknowingly spend money at.