New Poll: Over a Third of Americans Support the OWS 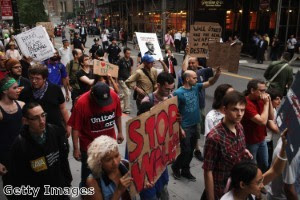 I was just reading some interesting poll about OWS protest. Here are some results:


More than one-third of the country supports the Wall Street protests, and even more – 58 percent – say they are furious about America's politics.

Some 37 percent of people back the protests that have spread from New York to cities across the country and abroad, one of the first snapshots of how the public views the "Occupy Wall Street" movement. A majority of those protest supporters are Democrats, but the anger about politics in general is much more widespread, the poll indicates.

More generally, many more Americans – 58 percent – say they are furious about the country's politics than did in January, when 49 percent said they felt that way.

hat's more, nearly nine in 10 say they are frustrated with politics and nearly the same say they are disappointed, findings that suggest people are deeply resentful of the political bickering over such basic government responsibilities as passing a federal budget and raising the nation's debt limit.

This wrath spreads across political lines, with about six in 10 Democrats, Republicans and independents saying politics makes them angry.

Fewer are hopeful about politics than when the year began, 47 percent down from 60 percent. Only 17 percent of respondents say they feel proud or inspired.

The poll found that most protest supporters do not blame Obama for the economic crisis. Sixty-eight percent say former President George W. Bush deserves "almost all" or "a lot but not all" of the blame.

Only 14% of Republicans are sufficiently outraged to care about these protests? I suppose the other 86% are praying to Baby Jesus or Tim Tebow.