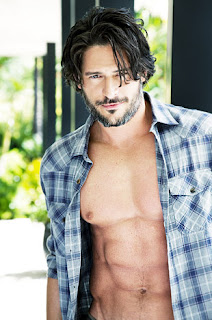 To keep things lighthearted and sexy here, I thought would post something on Joe Manganiello and his sexy new role in 'Magic Mike'.

In the CeleBuzz interview, Joe gives us the lowdown. Here's some of the interview:


Celebuzz could not be more excited you are in this film! Did you have any hesitations about the role? It is sort of pegged as the “hot guys getting naked” movie.
Well, I get labeled that on True Blood! I mean, when Steven Soderbergh wants you to do his movie, you say yes. Plus, the cast is the greatest group of dudes ever. It is epic. Epic! We have had so much fun.

Okay Joe, let’s get down to it. How much are we going to be seeing of you?
You are going to see a surprising amount. Shocking amount, actually.

Shocking as in…full frontal?
You are going to see…I mean…. No, no full frontal! But his name is Big Dick Richie for a reason [laughs

Girls everywhere are fainting right now! So how did Channing help you prep for the role?
It’s based on a character that Channing knew who was named Big Dick Charlie. So we talked about him a lot. I also talked to a group of male strippers from Dallas in the ’90s.

What did they tell you?
They told me it’s sex, drugs, rock and roll. The guy I talked to was ‘the fireman’ in the ’90s so I am going to be doing a fireman routine in the film. Suspenders, hat, I get the axe going — the whole deal!

We’re assuming there are some good dance numbers with all you guys?
Oh you have no idea! It’s been so fun.

Who is the best dancer?
The man to beat is Channing.

I'm sooo looking forward to this movie
Posted by Wonder Man at 10:45 AM