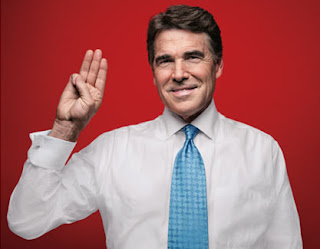 In an interview with Parade magazine, Rick Perry talks about Trump and his views on Obama's birth certificate.


Governor, do you believe that President Barack Obama was born in the United States?
I have no reason to think otherwise.

That’s not a definitive, “Yes, I believe he”—
Well, I don’t have a definitive answer, because he’s never seen my birth certificate.

You don’t believe what’s been released?
I don’t know. I had dinner with Donald Trump the other night.

And?
That came up.

And he said?
He doesn’t think it’s real.

And you said?
I don’t have any idea. It doesn’t matter. He’s the President of the United States. He’s elected. It’s a distractive issue.

Trump is a non-mutha-frakking factor! And Perry needs to get himself together quick, or he will be chilling with Newt Gingrich and Jon Huntsman

source
Posted by Wonder Man at 4:12 AM

Trump and Perry.
Cut from the same Behind The Times, Beating A Dead Horse, Can't Believe The Truth fabric.

They all look to Trump as some sort of "Sage of the Republicans." LMAO!

I never knew it was possible to be this pandering and reprehensible at the same time. Leave it to Perry to lead on these fronts.