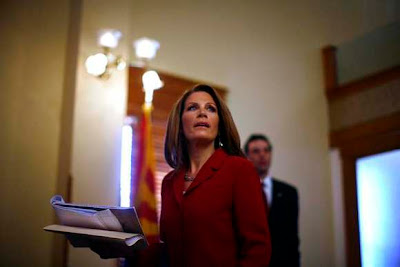 Bachmann is getting shafted by her staff. They are ditching her in high numbers:


The entire paid New Hampshire staff for Republican presidential candidate Michele Bachmann has resigned, in another blow to the Minnesota congresswoman's foundering campaign.


Jeff Chidester, Bachmann's former New Hampshire campaign director, confirmed the mass exodus. "The New Hampshire team has quit," he said. "We'll issue a joint statement as to our reasons why."


Chidester's confirmation, made via email and voice mail to National Journal and CBS, followed a confusing day in which Bachmann insisted that reports of the staff departures were untrue. But Chidester said he left last week and informed "people that are closest to Michele."


"I'm sorry the national team is confused," he said. "They shouldn't be."


One of the aides who quit, Caroline Gilger, Bachmann's southern state field director, is joining the rival campaign of Texas Gov. Rick Perry.


According to the New Hampshire Union Leader, a total of four staffers have left: Chidester, Gilger, Tom Lukacz and Nicole Yurek. Uncertain was the future of staff member Matt LeDuc.

This doesn't look good for Bachmann.

source
Posted by Wonder Man at 4:17 AM

It never looked good for Bachman- she is a moron!

I believe it's called "Abandon Ship!!"