This is pretty interesting. According to this study, more folks are tuning in to LGBT themed shows:


Scripted Shows for Teens, Realities for Older Females
Teen and Millennial viewers in particular dedicated over a third of their primetime scripted TV viewing to series depicting at least one regular or recurring LGBT character.* Females 50 and older were attracted to realities featuring LGBT cast-members, hosts, judges and/or competitors, dedicating a significant share of their reality TV time to these programs.* Overall, one in four scripted series and one in five reality shows were LGBT-inclusive.

“The inclusion of LGBT characters on TV more accurately portrays the diverse and multicultural society we live in by encompassing all segments of the population,” said Matt O’Grady, EVP, Audience Measurement, Nielsen. 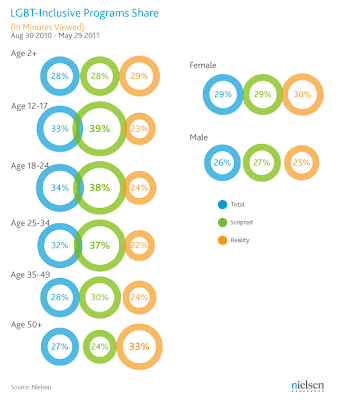 LGBT-Inclusive Shows Attract Dynamic Audiences
Audiences for LGBT-inclusive shows were as diverse as the programs themselves, though certain demographics appear to have been more exposed to LGBT images. Within the 25-49 age demographic, LGBT-inclusive programs (and its advertisers) were most likely to reach:
Non-white, professional Millennials without children also tended to watch LGBT-inclusive shows more frequently than primetime in general.
LGBT-Inclusive characters were incorporated into shows that skewed towards Eastern and Pacific viewers and were less watched by Midwesterners. This differential was most pronounced among 18-24 year olds in the Midwest, especially when compared to 18-24 year olds in other regions of the U.S.

Interesting. I wondering this will promote more LGBT TV?

source
Posted by Wonder Man at 7:29 AM