Teacher Cleared of Wrongdoing in the Anti-Gay Facebook Posting Incident 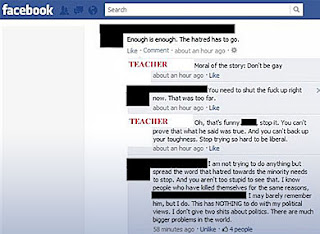 Joplin Superintendent Doctor CJ Huff tells News Talk KZRG complaints were made about things high school math teacher Jim Whitney allegedly posted on Facebook. But apparently Whitney's Facebook account was hacked.
"It's unfortunate when you're dealing with social media and dealing with technology and the potential for people to get on to other people's accounts and say things that shouldn't be said."
Huff says the Joplin School Board was made aware of the situation at Tuesday's board meeting and no action was taken.


Hmm, interesting... I wonder if this is true or not. What do you think?

The bully was white and victim black....forget it. This system the way it is ,is against blacks unless you have money.

I really can't say because I am totally distracted by luciferosirisarnold's picture of utter hotness.

Behrmark, there will be no diking on the dance floor lol.....Thanks for the comment