Is This an Epidemic? Another Teacher Spouts Out Anti-Gay Remarks on Facebook

Another Dumbass Teacher crossed the line on Facebook. Jim Whitney had plenty to say about being gay and how many deaths it would take to send a message: 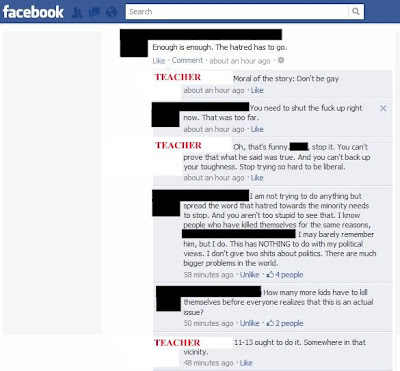 The comments first appeared on the wall of a former student’s Facebook profile on Oct. 19. The former student, Josh Gonzalez, had posted a Facebook link to a news article about a gay 15-year-old from Canada who committed suicide after being bullied.

That comment provoked reaction and criticism from others, including this: “How many more kids have to kill themselves before everyone realizes that this is an actual issue?”

Whitney did not respond to requests for an interview but released a statement via email on Monday afternoon saying he was sorry the incident occurred.

“I do not condone bullying or harassment of any kind and I am very aware and saddened by the negative impact this type of behavior creates. I regret that the posts appeared on Facebook. They do not reflect my personal views and I apologize for any and all offenses caused by the comment.”

The students don't need a person like that in schools. So far, the school district is looking into Jim's actions. He should be in deep trouble!

source
Posted by Wonder Man at 9:33 AM

What is wrong with people? I love that he now says the posts, that he admits to making himself, don't reflect his opinion on bullying apparently. Seriously....what?

This is sad. Freedom of speech gone amok....Just sad. And stupid.