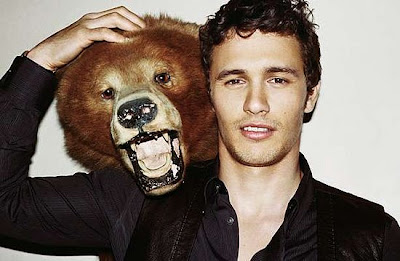 "the worst downside, and I don't consider this a downside, the worst thing that anybody could say is that I was gay and if somebody said that I guess they would be wrong, but I also wouldn't care and as far as being typecast, that's not the case, nonetheless I would be happy to play 100 gay roles as long as they were always good parts."

James basically saying he has no problems playing gay
Posted by Wonder Man at 3:53 AM

I wonder about this statement...yeah, I guess James, but what are you trying to say? Really.

He's trying to say he couldn't care less about people trying to insult him. It's like when people call you fag and you go "yeah, and?". He's happy playing the roles and everything brushes off his shoulder.

I'm interested to see him pull of Ginsberg. I would have gone with Phillip Seymour Hoffman.

Good for him. I've always liked him.

I never really thought much of him until "Milk." I then went back and re-watched movies he was in, including the Spiderman movies, and realized how adorable he is. He can play for our team any day.

He is a good actor. I remember when he won the Golden Globe for best actor for James Dean...I was thinking who was this guy? He's cute.

That was about 10 years ago....and now - yeah - he's come a long way! He was also good in Pineapple Express!