Old Religion for NO Women 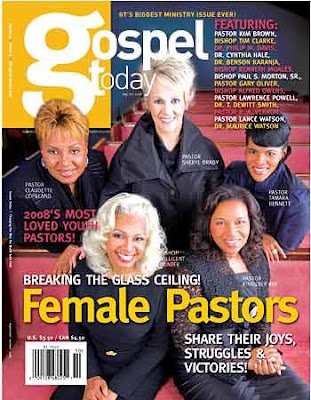 Gospel Today, a Christian magazine of sorts, was going to highlight women pastors. Very hip and forth coming, right? For me, it is daring and great, but for the Southern Baptist Convention, not so great. In fact, they removed the magazine.

Why? Well, because they're women of the cloth.

“It’s really kind of sad when you have people like [Gov.] Sarah Palin and [Sen.] Hillary Clinton providing encouragement and being role models for women around the world that we have such a divergent opinion about women who are able to be leaders in the church,” Hairston said. “I was pretty shocked.”

So am I, Teresa. Apparently the Southern Baptist ain't trying to hear it. But I think they are wrong. The word of God should be taught by a person who deemed to do so. It's not a man's job and it shouldn't be sold as a man's job.

Pastor Tamara Bennett, who's on the magazine cover stated.

“God’s assignment is that no souls are lost and all are saved,” Bennett said. “Gender is not how God sees it. We are about winning souls, period.”