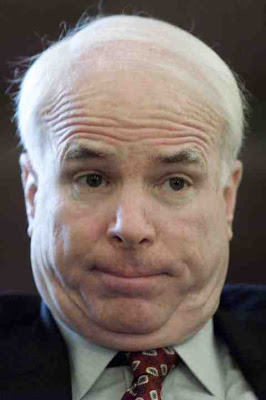 According to the news, Congress has reached an agreement about the bailout, and hopefully the word will be out soon. But with this new info, will McCain get back on the campaign trail?

His "helpful" notion was suppose to provide leadership to the decision. For some reason he believed this was not about politics, but actually it was.

Looking at the events yesterday, McCain hoped that his efforts would showcase his leadership, however it drew criticism. It looked desperate and mirrored poor decision making. Of course it was political, if it wasn't, he wouldn't had a mini-press conference. He would've been in Washington yesterday, and he wouldn't try to broadcast to everybody that he's on top of this.

If the country was first to McCain, he would have stop this foolishness a long time ago. He's been in Congress for years and did nothing. This week, he said everything was great, then he changed his mind about the bailout, and admitted to not reading the documents. And now he wants to stop the debates, including Moose Mess's too, to fix something he just had a crash course in?

Oh, McCain...are you kidding us? That's not leadership, that a panic attack. You are not fit to lead.

Now it's time for a Chicago-style beatdown.

The failing companies shouldn't get a damned dime. Instead take that $700 Billion with a B and spend it on Universal Health Care, Better schools, transit infrastructure, research and development, and the list goes on.