There was a time in my life when I wanted to be a fashion designer. Among the influences of fashion and style, Bob Mackie was my inspiration.

From my Cher doll to Diana Ross's powerful gowns, I was drawn to his look and over the top style. Now, he's going to spice up the Diva Omega, Tina Tuner. Here's an design from her upcoming show. 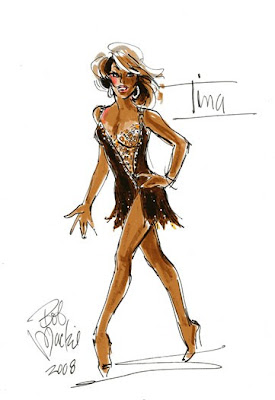 “The first time I saw her,” recalls Mackie of meeting Turner in the mid-Seventies, “she had on a beautiful man-tailored silk blouse, gabardine pants and alligator loafers. So opposite to anything that we thought of as Tina Turner at the time.” Nor did it really scream Bob Mackie. Thankfully, designer and singer saw eye to eye — or perhaps sequin to sequin — when Mackie was enlisted to outfit the star for her appearances on “The Sonny and Cher Show.”

Now, more than three decades later, Turner, 68, says she’s “leaning a bit more towards a rock-influenced look.” To that end, Mackie has been looking back at the thigh-grazing dresses, beaded tops and shiny stretch pants he created for Turner’s solo club act in the late Seventies.

His new designs include the requisite “Proud Mary” minidresses, as well as a postapocalyptic look inspired by Turner’s role in 1985’s “Mad Max Beyond Thunderdome” and a vixen getup à la “GoldenEye,” the 1995 James Bond film for which she wrote the theme song. And, though he’s working in a mostly neutral palette (“Because there’s so much there, you wouldn’t want to [use a lot of color],” he notes), Mackie’s going full throttle with the details, including plenty of lacing, fringe, studs and jewels.