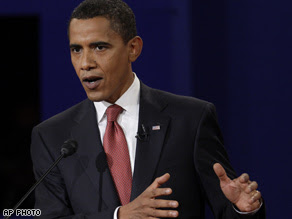 Yes I'm biased. But the debate was telling to me that McCain was not connecting with folks. The Audience Reaction grid showed the truth. There were some sharp moments from McCain, but he couldn't look at Obama in the face.

Obama attacked him face to face with this.

Strictly diva. McCain was talking about who he knows, but nothing about what he can do. He may be more experienced, but that was yesterday. Things change, times change. It was cheap to end his speech with his vet past. Very political, John.

So I felt that Obama took a few steps forward.

I hate to say it, but I think McCain kind of won it last night
:(

I'm hoping Obama will be better next time.