Pride IS a Deadly Sin 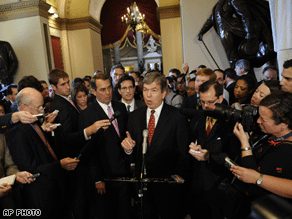 The fallout continues in the White House and on Wall Street. The Bailout Bill didn't pass even with the help of Mighty McCain swooping to help.

The package, which was backed by both the Democratic and Republican congressional leadership as well as President Bush, failed in the House by a vote of 228-205.

And what's worst is the fact that the GOP is blaming Pelosi for something she said.

House Minority Leader John Boehner said, "I think that we need to renew our efforts to find a solution that Congress can support. I do believe that we could have gotten there today had it not been for this partisan speech that the speaker gave on the floor of the House."

But what she said wasn't that serious and it shouldn't be that serious when it comes to protecting the country.

This is what she said: "the cost of the bailout is a number that is staggering, but tells us only the costs of the Bush administration's failed economic policies -- policies built on budgetary recklessness, on an anything-goes mentality, with no regulation, no supervision and no discipline in the system."

Really? Like I said, not that serious. But they want to blame her for its failure. If that's case, then those GOP folks are fools and reckless even with their dirty trophy, McCain "leading" them. It's just plan, foolishness.