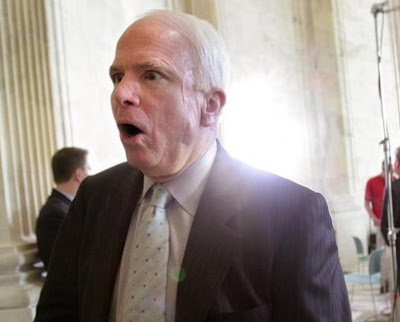 Since he's not ready to deal with the economy, or even debate the issues, McCain wants to suspend his campaign to focus on the "historic" crisis facing the U.S. economy.

Child Chesse, that's not really the issue, but here's more.

It was not immediately clear how extensive the suspension he announced would be -- whether it would include dropping television advertising or just canceling scheduled appearances. McCain took no questions after reading his statement.

Immediately after the announcement, White House press secretary Dana Perino released this statement: "We welcome Sen. McCain's announcement. We are making progress in negotiations on the financial markets rescue legislation, but we have not finished it yet. Bipartisan support from Sens. McCain and Obama would be helpful in driving to a conclusion."

But here's the kicker

The Obama campaign said in a statement that Obama had called McCain around 8:30 a.m. Wednesday to propose that they issue a joint statement in support of a package to help fix the economy as soon as possible. McCain called back six hours later and agreed to the idea of the statement, the Obama campaign said. McCain's statement was issued to the media a few minutes later.

"We must meet as Americans, not as Democrats or Republicans, and we must meet until this crisis is resolved," McCain said. "I am confident that before the markets open on Monday we can achieve consensus on legislation that will stabilize our financial markets, protect taxpayers and homeowners, and earn the confidence of the American people. All we must do to achieve this is temporarily set politics aside, and I am committed to doing so."

So basically, he wants to look like he's the leader in this, possibly forcing Obama to comply. If Obama does, it could look like he's following McCain's lead; if not, Obama may look like he's all politics and nothing else.

So McCain you ain't slick.