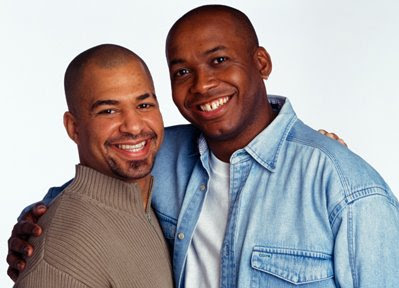 Kort met a gay couple who said they're monogamous, but have threesomes. He asked them again and they said the same thing: "We are monogamous. We only have three-ways together, and are never sexual with others apart from each other."

I'm in a relationship and I couldn't imagine bringing someone else in our bed. It's fun when you're single, but I won't do it while I'm in a serious relationship. I know some folks like the thrill and energy, but I feel there's a hidden cost.

However, I know it works for some folks, they make it work. But I have also seen it destroy relationships. It's becoming acceptable to all couples, but is it something consider? For me, no, I'm too selfish and I'm Southern (which means I'm stubborn and set in my ways). So the jury (for me) is still out there. But if works for you, more power to you.

I've always believed that monogamy was more than just only having sex with your partner. I think it's more of an understanding and agreement between two people.

Although, I agree with you, simply put, if sex wasn't that much of an issue, why do something so dangerous? As far as the potential for drama, STDs, and ego-injuring that outside sex-getting can bring to the table.

You think you're stubborn because you're a southerner? How do I explain this. I'm an Italo-American from the northeast. Not only are we stubborn, we know how to carry a grudge.

Keyron likes to say I carry around a big black cross.

Monogamy isn't simply an "understanding between two people." That would be a contract. Monogamy is "the condition or practice of having a single mate during a period of time." Bringing a third party in makes it something OTHER than monogamy.