Let Palin be the Moose Mess she really is 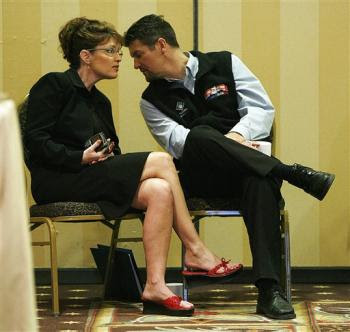 The New York Times conservative columnist Bill Kristol argued in his column on Monday that McCain must "liberate his running mate from the former Bush aides brought in to handle her -- aides who seem to have succeeded in importing to the Palin campaign the trademark defensive crouch of the Bush White House.

"McCain picked Sarah Palin in part because she's a talented politician and communicator. He needs to free her to use her political talents and to communicate in her own voice," Kristol wrote.

One McCain source said Palin's husband, Todd Palin, was frustrated with how the campaign was preparing his wife for the debate, but did not elaborate. Another McCain aide, however, dismissed those reports.

But a McCain adviser said the conservatives worried that the campaign was squeezing the charm out of Palin were missing the point.

The adviser said preparing her for the debate was "really hard" because the Alaska governor was learning about issues she had never dealt with before -- including those regarding North Korea and other hot spots around the globe.

Really Hard? Hell, that's what a VP should know. What is really going on? They said she was qualified, yet she knows nothing, she can't answer any major or vital questions, and she needs a VP camp to prepare her to lose. I don't know about you, but this is proof she's not ready. Sarah, get out now, the romance has ended. You're done!

Uggh those shoes! Horrid. But the husband is a hottie.