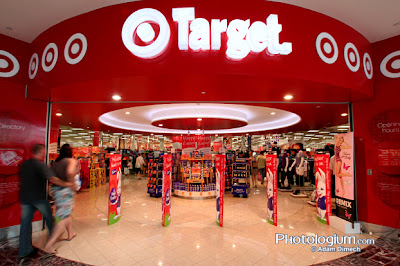 They really don't. In fact, they are suing the group, Canvass For A Cause, for talking to the customers about their practices.


On Friday morning, Superior Court Judge Jeffrey B. Barton will listen to arguments from both sides after Minnesota-based Target Corp. sued the San Diego-based Canvass For A Cause (CFAC) to prevent the grass-roots activist group from gathering petition signatures in front of its stores in California.

The fundamental American right to free speech is at the heart of this case, said Tres Watson, executive director of CFAC who is a San Diego resident.

In an earlier court date on March 8, Judge Barton denied a motion by Target’s attorneys seeking a temporary restraining order against CFAC. Barton ruled that the right of free speech trumps over the business interest of Target in refusing the request.

In a court document, a Target official at the Poway store complained that CFAC volunteers were talking to customers about gay marriage, among other issues, and contended that they had received complaints from some customers who were upset by the topic.

Court documents also show that Target Corp. is worried that the company may be viewed as being for gay marriage if activist groups like CFAC are allowed to speak to their customers.

Really, Target? Do they think folks will really think that? Silly company.

source
Posted by Wonder Man at 9:01 AM

I hate Wal-Mart and now I hate Target (Mossimo be damned). I guess I'll save lots by not shopping at all. :)

I've got more info on this story. Apparently the group Target is suing would not disperse from TEN different stores in the San Diego area after they were told about the company's policy against petitioners standing in front of their store. And apparently this refusal to leave has happened on several occasions.

As far as I'm concerned this LGBT group brought it on themselves. This is not the right way to draw attention to marriage equality.