The anime classic 'AKIRA' is being made into a live action film. But if you know Hollywood, you know they will find a way to frak it up.

The lead characters are Kaneda and Tetsuo, clearly Japanese all up and through. 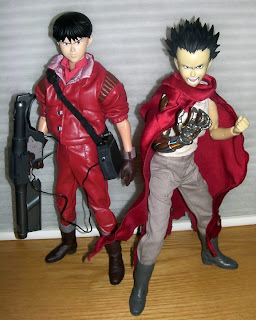 But here's the shortlist for these characters

Scandal! Well, one of my favorite sites, Racebending.com called this mess out.


Given the current lack of lead roles for actors of color in the science fiction genre, the complex characters of Akira would be a great opportunity for Asian American actors. Last year, a Racebending.com volunteer ran a count of the 241 Warner Bros movies from 2000 to 2009 and found that only 2% had an Asian first-billed lead. Aside from The Matrix trilogy starring Keanu Reeves, the majority of films with Asian leads starred Asian nationals like Jet Li and Rain.


Although Asian American actors are sometimes cast as supporting actors in films like this month’s Sucker Punch, they still struggle for representation in leading roles in Warner Bros. films. If not in a film called Akira, for characters named Kaneda and Tetsuo, when will Asian Americans get to star in a Warner Bros film?


In contrast, even though 40% of movie tickets are purchased by people of color, 90% of the films released by Warner Bros between 2000 and 2009 featured a white lead.

This is really bad planning on WB's part. AKIRA is a known classic and respect should be paid. To possibly cast any of these "IT' boys means they are depending on the look and not the story. Newsflash! AKIRA is a CLASSIC for over 20 years. We don't need an A&F face to make us watch this movie!

So please sign their petition on their website and keep AKIRA real.
Posted by Wonder Man at 6:57 AM

That is terrible. Did they learn nothing from Airbender. Besides, we have plenty of Asian bunks we can cast.

Joaquin Phoenix I could somewhat understand because he looks like the character on the bike with the American flag jacket. The other actors? Puh-lease. No way they should be part of this movie.

I'm certain they can find Asian-American actors that can fill these roles. Hollywood had no problem casting for The Fast & The Furious and the Rush Hour movies series.

If there's female characters I hope they're smart enough to cast Ziyi Zhang. That girl is bad ass.

Didn't Karate Kid teach hollywood that a relatively unknown person of color can lead a movie and be a box office success? Sadly, I'm not surprised. Very sadly.

I remember this toon. I can hardly wait.

I wonder who's going to direct. Maybe M. Night Shyamalan will be available. (rolleyes.)